This was not my first Pride festival by any means but was certainly the first time I had experienced a Pride Festival from the point of view of Drag King. For many many years though my favorite part of any Pride Festival has been the Drag Queens. I went out of my way to see their shows out of love for the art. So this year serving as King of Pride in Lancaster, PA was an honor and exciting all at the same time.

My nerves had my heart pounding most of the day and I know by days end I was a hot mess in nerves. This was my largest event and there were many people. I know I wasn’t the only performer with anxiety, its not an easy thing to do. Drag takes major bravery and passion for the art of gender bending. Of course there is the normal nerves about performing in front of many people but there was also other things. There have been many men killed for wearing a dress and many womyn raped for appearing masculine. We break societies rules in front of a public audience. We dance around and laugh at the gender construct knowing that someone is likely very uncomfortable about it. By simply performing we make ourselves a target. I think for many of us its the scariest part of Pride and I know it crossed my mind more than once. I am sure the Queens struggled with the same thoughts and fears, somehow we all moved past it and had a successful show.

The best part was all the varieties of people interested in trying drag. Drag is such an opener of doors for people. It helps them explore the other side of gender allowing for the exploration of it full time or just as a performer. Do we want to honor our masculine side some of the time or do we want to have it be who we are. I spoke to young transmen about how this will help them feel more confident in their decision to transition, since it is irreversible. Then I spoke to young ladies that identified as femme but were told silly things like they are too girly for it. Have you seen some of the Queens that do this? Truck Drivers wear dresses so get over your dam gender roles now! Gender is a social construct and regardless of how you dress or what genitalia you have it does not apply if you choose to dismiss the social construct. Drag is a form of dismissing social constructs. Then there were young gender variant people that are questioning their gender and Drag provides the perfect place to do so. I had a fantastic time having conversations about drag and what it means to people.

All 4 of my numbers went off without a huge hitch. “Somewhere Over the Rainbow” By Israel Kamakawiwo’ole was tons of fun. I managed to lai 11 people in less than 4 minutes….what a fun accomplishment. Then I did “Happy” by William Pharrell which can be imagined to be a large hit and very popular. I thought it was great fun to make everyone laugh and dance. My third number was a deep song for me at this time “Smooth” by Santanna has a special place in my heart. The best part was to make the girls blush and feel special.

The finale’ was my Pride though, absolutely. I was so nervous about this song. I had asked a bunch of queens to support me in the song and since no one answered…I wondered if anyone would support me. Then I decided to have faith in the music and in my ability to bring people together. I began to spread my word around the festival, asking them to join us on stage at the end. The song I chose was “Waiting on the World to Change” by John Mayer – a very political song with passionate words about unity. Many years Drag queens and queers of all kinds have been waiting on the world to change. It all started in little bars in dark alleys and now look at us under the sun of the day in a public park! Truly this performance not only involved the queens but everyone that chose to participate with their hearts. Many people sat upon that stage and we all shared in our PRIDE! 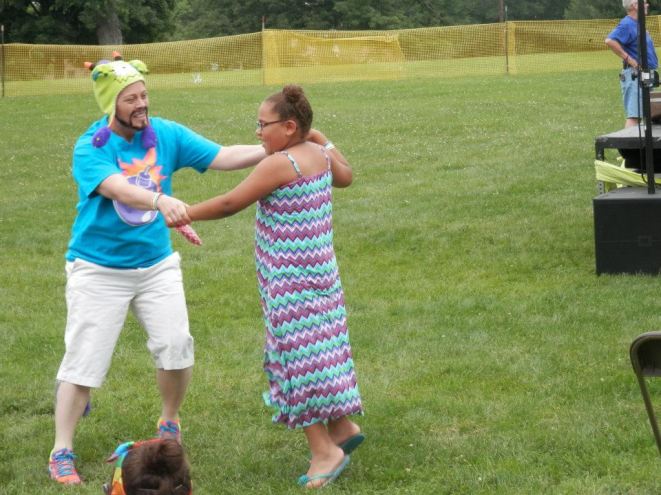 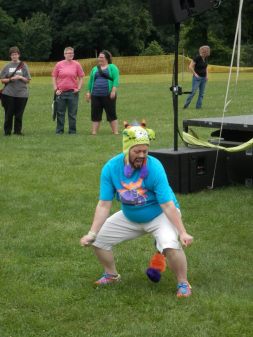 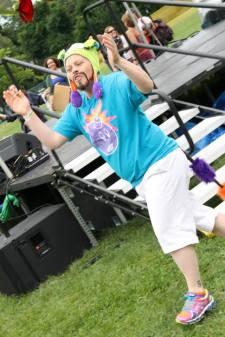 Somewhere Over the Rainbow

Izzy “Somewhere Over the Rainbow” 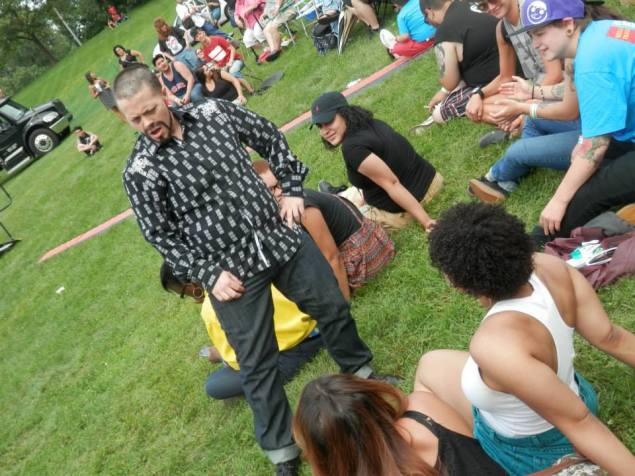